Research and/or work interests: I’m an evolutionary biologist, with an interest in sexual selection and conflict, and social behaviours in reptiles. Overall, I’m interested in the different interactions between the sexes and how that can lead to novel adaptations which exhibit plasticity and eventually drive the evolution of a species to adopt unique social systems. I’m particularly interested in these patterns in reptiles as often they’re considered ‘behaviourally inferior’ to mammals, though in fact they are very socially complex animals but receive limited attention. I’m also interested in scientific illustrations and dabble in a bit of sci art too! .

How did you become interested in open research?
I did my undergraduate studies in the UK at a top notch research university which provided access to several high impact journals making researching information easy. I realized that I took this for granted when I moved to India to work in a conservation non-profit, where we had to rely on anything freely available on google scholar, thoroughly limiting the ability to make a solid argument about the importance of certain projects. It was at this time that I began to experience the disparity in access for universities that can afford subscriptions and grassroots nonprofits that do important work too and deserve the same access - sometimes even more - in order to gain funding.

If you had the power to change one thing about current research practices in your field, what would it be?
I would be able to convince donors that core scientific research like surveys is vital for conservation too. Funding aesthetic projects with immediate deliverables that can be shared on social media does less to save a species compared to conducting long term ecological studies and comparisons. It is frustrating and limiting to ‘hide’ such objectives within a larger project that are more about superficial topics.

What strategies/approaches do you think are most likely to lead to a research culture change?
There needs to be more access and acceptance of people interested in scientific careers but have not necessarily taken that path academically. Just because someone did not realize (or was not encouraged) to follow a career in science at 18 and ended up studying something else, it does not mean that the only valid contribution they can make is in a voluntary/intern/assistant capacity. Bridge courses should be offered alongside scientific degrees. Also, organizational rivalries leading to research territoriality is really detrimental in forming productive collaborations and gaining more insight into a species (e.g. two organizations working within the same river system but on two different rivers, where the focal species’ range covers both sites).

Do you see any downsides to some open research practices?
Poachers now use scientific literature, where even if field sites have been censored, by simple reading the basic geographical and habitat descriptions and using on-ground contacts, they are able to easily identify field sites and locations of rare species. Misinterpretation of results to serve political agendas and biases are also real threats. It is very difficult to contain misinformation once it has gone viral.

Where were you born and raised?
I was born and raised in India. I then moved to London (UK) when I was 13 until at 26, I moved back to India. You may say that I was ‘raised’ in both countries

What’s the last book that affected the way you currently think about things?
The Secret Social and Emotional Lives of Reptiles by J Sean Doody, Vladimir Dinets and Gordon M. Burghardt. I haven’t read all of it. But, just the book preview on amazon was inspirational. It spurred me on to develop my PhD research proposal along their line of argument and I haven’t been this excited about biology since my undergraduate days. I also read Life: The Leading Edge of Evolutionary Biology, Genetics, Anthropology and Environmental Science by John Brockman. It is a collection of essays and conversations between some of the top minds in the fields and the level at which these folks are thinking about biology, the universe, biotech and the meaning of ‘life’ is astounding. I was floored by it.

Where is someplace you’ve never visited but would like to? Why do you want to visit there?
I would like to visit the galapagos, great barrier reef, bornean rainforest, yellowstone, svalbard, the saharan desert…everywhere!

If you could start your career over again, but had to switch to another field or subdiscipline, what would you switch to? Why?
I would be an ancient Egypt archeologist with a focus on art. It’s still an obsession that has spilled over from middle school history into adulthood. Or a scientific illustrator!

Tell us about one of your hobbies.
I got into crocheting a few years ago once my friends began to have babies. It’s actually really therapeutic and unlike knitting, if you drop a stitch you can pick it up quite easily! They make great handmade gifts!

What do you now know about the way science gets done that you would have found surprising before you started your training as a scientist?
There’s a colloquial term in Hindi called ‘jugaad’. It’s difficult to translate but the closest description is that it refers to something being a non-conventional, frugal innovation or improvisation. What was most surprising is that a large part of science is ‘jugaadi’-most scientists are bumbling along having to constantly come up with innovative solutions or work-arounds for a novel problem or are barely keeping it together under the surface.

Do you have a favorite non-human organism? What is it and why is it your favorite?
The sarcastic fringehead fish is my favorite. Firstly, it has probably the coolest name I’ve ever heard. Secondly, their mouth morphology is absolutely out of this world - words would not do it justice - I recommend Youtubing it!

What is something about you that your scientist colleagues might find surprising?
I find the idea of a career in science intimidating and constantly doubt whether I’m cut out for this field. Very often it seems like I do NOT have things as put together as my peers or am not smart enough.

What is something about your work in science that your friends outside of science (or the general public) would find surprising?
The sheer scale at which illegal poaching removes animals and affects populations. A single consignment of illegally trafficked freshwater turtles can number up to 4000-6000 animals, with almost 20,000 being trafficked in one ‘season’. And it is estimated that only 10% of illegal consignments get intercepted-so what we’re seeing may be only 1/10th of what’s being removed.

What was your most embarrassing field work moment?
In a single boat survey trip, I got stuck to my knees in a riverside mudbank and needed two field assistants to pull me out, then the baby crawled to the boat. At the end of the day, I then fell into the river while trying to jump off the boat onto the river bank because I got distracted while we were discussing what desserts to pick up on the way back to the field station. 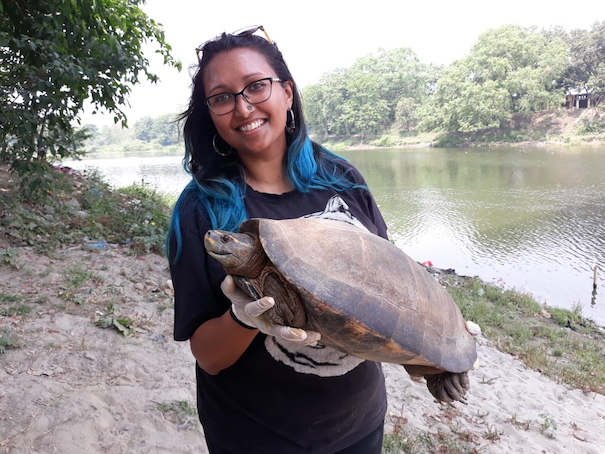